How are teams formed?

​Teams are formed appropriately for positional needs, skill set and personalities.   This is important to our structure to ensure we are able to place athlete where they are best FIT for that season, that position, that individual.  Roster formation happens from tryouts throughout the fall.

Why don't you share the rosters and practice/tournament schedules before the season starts?

We ask our families to commit to our club based on beliefs, resources, education and philosophy. Because of this, we do not release rosters until all rosters are full.

We form practice schedules based on athlete conflicts, best as possible, and have make up practice opportunities.  The roster needs to be full to begin this process.

We want you to be able to select your club based on the program, not the travel or practice schedule.  Our travel schedules are selected, by the director, according to the needs of each team. These needs could be multi-sport athletes, level of athletes, date conflicts, etc.  Until the team is formed, the details cannot be formed to best suit each family.

When families select clubs for schedules and rosters, product is rarely delivered as these two items are not directly correlated with individual success.

What is Master Training?

Master Training is direction/teaching from 1 person in the practice slot with implementation of the skill carried out by the coach of the team, to the team.  All athletes and families can believe in the quality of instruction, regardless of team, regardless of coach.  All athletes receive all of our best!

We, the family, understand that if our athlete incurs an injury, becomes ill, is dismissed from the club, or decides not to play at any time that I remain liable for my total club season dues.  Any outstanding fees and dues will be due within seven (7) days of my athlete's termination from the club.

- Each player must pay a deposit in order to confirm their position on their team. This deposit is NON-REFUNDABLE as are all club volleyball tuition payments thereafter. High Street Athletics will NOT refund any payments.

- If any payments are late or in default, my athlete will not be allowed to attend any practices or tournaments until payment is made. I will also be held liable for any and all attorney, court and administrative costs associated with the collection of unpaid fees.  High Street Athletics reserves the right to assess a $50 administrative fee on any late/default payment, or any credit or refund processed for any payment received in order to cover the costs of said processing.

Can we bring food to the tournament?

NO. Most sites do not have the space for parents to set up food for the girls. Please respect the playing site's rules. Our recommendation is to bring snacks in the player's bags or have the parents bring a non-cooler bag to carry the snacks.

Is there an admission fee for tournaments?

Yes. Most tournaments will have an entry fee so it is best to bring cash for all spectators.  The athletes will get in for free.

Should I bring a chair?

Always. Even if seating is provided, some tournaments still allow you to bring your own chair. It's best to have it and not need it then to have to stand the whole day.

Does my player need a whistle?

Yes.  All players have learned how to officiate and will need a whistle for tournaments.

Do I have to stay in the hotel block provided?

No. The club will try to find hotel blocks for as many tournaments as possible, but sometimes, it is just not possible in the area for various reasons. It is also NOT REQUIRED for you to stay in the club blocks provided. We know that all families have different budgets and different preferences for hotels; this makes it almost impossible for the club to find the best hotel for everyone.

The only exception would be if the event is a "stay-to-play" tournament where the teams are required to utilize hotel blocks provided by the tournament directors.  These will be clearly delineated at the beginning of the season.

When do we find out the schedule for the tournament?

Most of the time, schedules aren't released until the Wednesday or Thursday before the scheduled tournament.  This happens because teams drop and add last minute which switches up the teams pools. So to create less confusion, the schedules are released later.

What are normal start times for tournaments if we won't know the schedule ahead of time?

For the major JVA and USAV tournaments as well as other tournaments with close to 100 teams participating, you can expect an 8 a.m. start time.

I keep hearing about an app for tournaments - what is AES?

AES (Advanced Event Systems) is a desktop and mobile platform that provides tournament information.  You can access AES via your computer or mobile device and follow your team schedule, scores, and rankings.  It is very useful during larger tournaments as all information for the tournament is updated quickly.  See this quick tutorial below for more info:   AES Explained!

AES Is your ticket to the events!  Get all the info here! 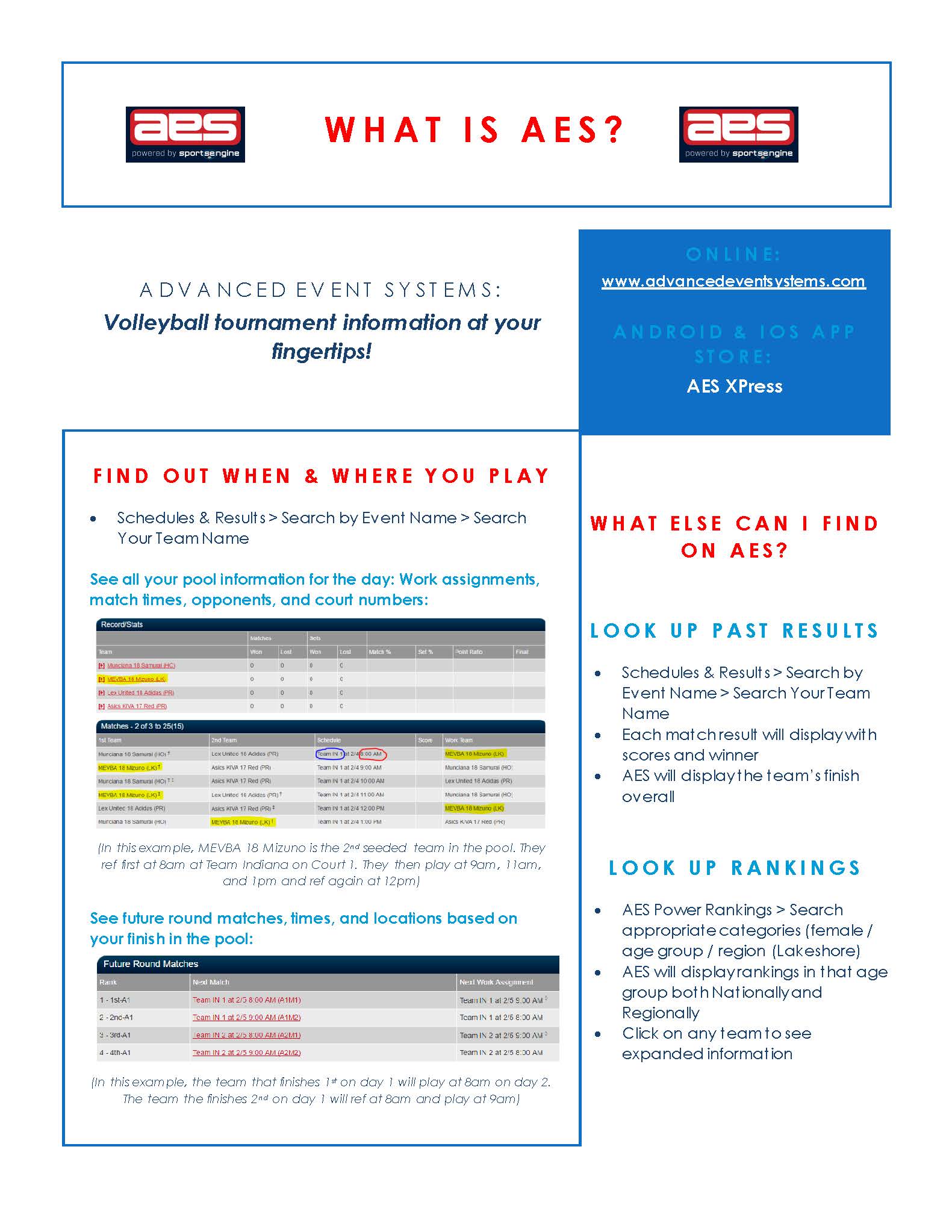